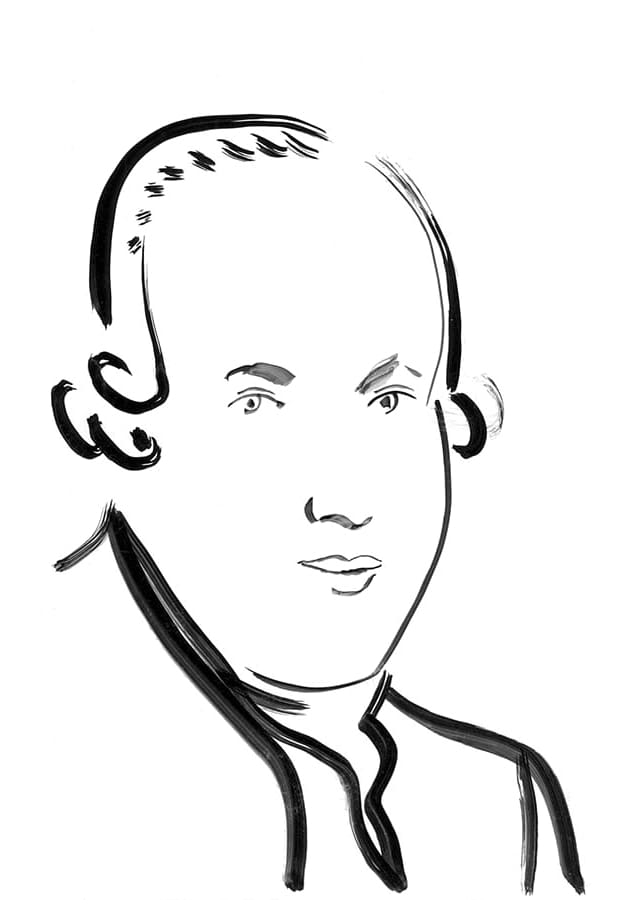 "The fate of the colonies interests us very much, and we shall do for them whatever circumstances permit"
«La suerte de las colonias nos interesa muy vivamente, y se hará por ellas cuanto permitan las circunstancias»
Count of Floridablanca
CONDE DE FLORIDABLANCA

José Moñino y Redondo, Count of Floridablanca, was a decisive figure in Spanish foreign affairs during the last quarter of the 18th century. His designation as First Secretary of State during the reign of Carlos III gave him a major role in determining the nation’s international policy during those years, which included channeling Spanish aid—whether covertly or in the open—to the Thirteen Colonies of North America in their rebellion against England, thus contributing to their independence. On the other hand, he was also one of the most prominent reformers of the Spanish Enlightenment, and during his active years in government, he was the driving force behind much of Spain’s progress. He is credited with such notable achievements as the development of the Economic Societies of Friends of the Country; the establishment of the National Bank of San Carlos, precursor of the Bank of Spain (Banco de España); the opening of several peninsular ports to free commerce with other Spanish ports in America; the modernization of the navy; the creation of a Council of Ministers; and various improvements in agriculture, science, and public works, as well as a cultural and educational renewal, among other advances.

The Count of Floridablanca was born in Murcia in 1728, and after studying law, he became a professor of Civil Law in the Seminary of San Fulgencio in his hometown. At the age of twenty, he moved to Madrid, where he practiced law for the next eighteen years and became closely acquainted with various members of the aristocracy, such as the Duke of Alba and the Duke of Osuna, as well as famed reformers like Campomanes. These contacts helped him in his professional career, and in 1766 he was appointed criminal prosecutor for the Royal Council of Castile. In 1772, he was named ambassador to the Holy See, where he worked successfully to ease the tense relations between Carlos III and Pope Clement XIV. In recognition of his services in the Vatican, the king bestowed on him the title of Count of Floridablanca.

After his Italian assignment, Floridablanca was recalled to Madrid to succeed Grimaldi as Secretary of State, which meant that he would be at the helm of Spain’s foreign policy for the next fifteen years (1777-1792). A year earlier, on July 4, 1776, the British colonies of North America had declared their independence at the Continental Congress in Philadelphia. By the time Floridablanca took possession of his new post, the colonial conflict had become one of his major concerns. From the early stages of the conflict, in April, 1775, and in response to a request made by the French Secretary of State, Vergennes, to the Spanish king, Carlos III, Spain had been assisting the rebel cause secretly, sending money and arms. Spain had stipulated, however, that it would not enter the war openly, nor would it recognize the independence of the colonies. With Floridablanca’s ascension to Secretary of State, his French counterpart assumed that the policy of joint assistance to the Americans, by the two Courts, would continue. Indeed, from 1777 through 1778, Floridablanca approved numerous deliveries of aid to the rebels: from Bilbao, through the merchant Diego de Gardoqui; and from New Orleans, through the governor of Spanish Louisiana, Bernardo de Gálvez. At the same time, in the Spanish embassy in Paris, the Count of Aranda was handing over large sums of money in the form of loans to the American envoy, Arthur Lee.

Floridablanca’s foreign policies improved Spain’s relations with Portugal and the Islamic Mediterranean. Initially, he adopted a cautious approach toward achieving his two main objectives: security for the Spanish territories in America and harmony in Spain’s dealings with France and England. His first approach was to avoid open warfare, for which he adopted a position of apparent neutrality, playing the role of diplomatic mediator between England and France. In Floridablanca’s view, if the diplomatic efforts were successful, Spain’s standing on the world stage would rise. They could also lead to the recovery of some, if not all, of the territories Spain had lost to Great Britain, and to a decrease in the country’s dependence on France. The minister was not blind to the opportunity the conflict provided for a naval and economic weakening of Great Britain, but he was wary of a total English defeat that would embolden France, even encourage it to impose its will on Spain. In addition, he was concerned that the revolutionary ideas germinating in North America would infect Spain’s overseas provinces, and he wanted to avoid, at all costs, the economic and human toll of another war. And so, while not opposing a continuation of Spain’s clandestine aid to the rebels, he concluded that neutrality would best serve Spain’s future interests.

Floridablanca’s mediation consisted in offering London three ways out of the conflict. The first involved a 25- to 30-year truce, during which there would be free commerce between England and the colonies, which in turn would be able to trade freely with other nations. The second option entailed a truce with France and the Thirteen Colonies, with a withdrawal of all troops, through the mediation of Spain. The final option envisioned an open-ended truce that would be monitored by representatives from all sides, until a permanent peace agreement could be reached.  Floridablanca believed any one of these options could bring about an end to the conflict, but London rejected all three. As a result, despite Floridablanca’s efforts to remain on the sideline of the hostilities, Spain declared war on England on June 22, 1779, having first agreed, through the Treaty of Aranjuez, to aid France in its support of the Thirteen Colonies.

Throughout the war, every decision regarding Spanish involvement was made by a small number of advisors under Floridablanca’s leadership. He, in turn, answered only to the king, Carlos III. Regardless, Spain continued to finance the rebels, sending arms and provisions, as it had been doing all along. The war was being fought along two fronts: one in Europe and the other in America. In Europe, the conflict took place in the waters of the Atlantic, with the sieges of Gibraltar and the recovery of Menorca, territories which Spain had lost to Great Britain through the Treaty of Utrecht in 1713. In America, Spain’s goal was to expel the British from its settlements in Central America, near the Gulf of Mexico, and along the Mississippi. Floridablanca sent 11,000 men to fight under the command of Bernardo de Gálvez in a campaign to claim Spanish Florida that lasted from 1780 to 1781. Its success resulted in the capture of Mobile and the decisive win in Pensacola, which in effect ended British rule in the area. A few months later, these successes, coupled with the aid that continued to flow into the region all through the war, contributed to Washington’s victory in Yorktown and the ultimate triumph of the revolution.

Floridablanca was ever mindful that Spain’s open assistance to the emancipation of the Thirteen Colonies would pose a danger to its own territories, since the same aspirations could spread to the Spanish holdings in America. Hence, Spain’s official recognition of the new nation was delayed until shortly before the Treaty of Paris in 1783, which officially ended the conflict. At that time, Floridablanca gave the Count of Aranda, who would act as Spain’s signatory, detailed instructions about the agreement. As a result of the peace treaty, Spain reclaimed the island of Menorca and Spanish Florida, thus assuring its control over the Gulf of Mexico. The treaty also fixed the boundaries between the new nation and the Spanish territories in North America, agreed on commerce conditions between the two, and established the navigational rights over the Mississippi River. In 1785, Spain’s recognition of the United States was formalized with Floridablanca’s appointment of Diego de Cardoqui as first Spanish ambassador to the new nation.

The Family Compacts between France and Spain ended definitively in 1789 with the French Revolution, leading to a sharp decline in Floridablanca’s political influence. Nonetheless, after the death of Carlos III in 1788, the new king Carlos IV kept him on as Secretary of State until 1792, at which time he was succeeded by the Count of Aranda. No longer involved in court affairs, Floridablanca spent the last years of his life in the cities of Hellín and Murcia, fending off accusations of abuse of power and misappropriation of public funds. He was imprisoned in Pamplona for a time but was finally absolved of wrongdoing. When the Spanish War of Independence against France broke out in October, 1808, he was recalled to preside over the Junta Suprema Central y Gubernativa del Reino (Supreme Central and Governmental Junta of the Kingdom), which assumed sovereign authority against the French under Joseph Bonaparte until the Spanish monarchy was restored under Ferdinand VII. However, he would hold this post for only a brief period, as he died in Seville on December 30, 1808.