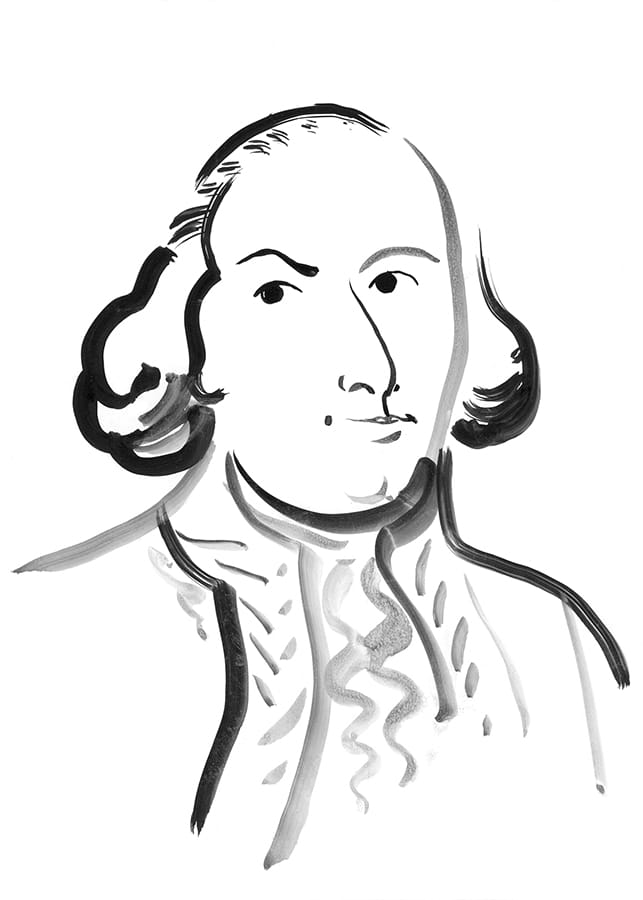 In the mountainous region of Andalusia in the south of Spain, in the province of Málaga, lies a little town called Macharaviaya. There, on July 23, 1746, Bernardo de Gálvez was born to Matías de Gálvez and Ana Gallardo, a couple of modest means but noble heritage. The family cultivated a small vineyard and grew a variety of fruits in that rural part of the country; they also raised goats and other domestic animals.

Matías was the oldest of four brothers—the others being José, Miguel, and Antonio—and he had been attracted to military life since he was a young boy. In 1755, he was assigned to the island of Tenerife, with the rank of captain, and he left his farm and settled there with his wife and son. Bernardo would return to the Peninsula at the age of sixteen to join the French regiment Royal Cantabre, which had arrived in Spain to take part in the invasion of Portugal during the waning years of the Seven Year War. At the end of the conflict, Bernardo moved to France with his regiment, where he remained for over five years and completed his military training.

In 1769, Bernardo’s uncle, José de Gálvez, was stationed in the Viceroyalty of New Spain on orders of King Carlos III to reorganize and restore order to the local governments. In addition to addressing this mission, Gálvez propelled the exploration and cultivation of northern California, successfully keeping the area out of Russian control. It was the same land evangelized by Fray Junípero Serra, who would play a pivotal role in its history, founding over twenty missions that would give rise to such modern cities as San Diego, Los Angeles, and San Francisco.

In 1769, Bernardo de Gálvez arrived in Chihuahua, where he was given command of a company of “leather-jacket” or “presidial” soldiers, special troops in the Spanish army who operated in that territory specifically to repel Apache raids. Young Captain Gálvez would distinguish himself brilliantly at the head of three military campaigns, during which he was wounded four times by arrow and spear attacks. In one of these expeditions, he would reach the Pecos River, in Texas territory.

During the initial action of a fourth campaign, Gálvez sustained even more serious injuries when he was thrown off his horse, and he was then advised to return to Spain. He did so in 1772, accompanied by his uncle José, who had already fulfilled his own arduous and demanding mission with outstanding success.

Bernardo de Gálvez was assigned to the Sevilla Regiment, and in 1775 he was selected for advanced military training in an academy created in Avila for this purpose. There, he would meet Francisco de Saavedra, who became one of his closest friends. Unfortunately, however, within a few months, Gálvez’s unit was incorporated into a special force assembled to attack Algiers, seat of the Berber piracy that was wreaking havoc on the Spanish coasts in the western Mediterranean.

The result of the expedition was disastrous: approximately 4,000 soldiers lost their lives and as many were wounded, among them Captain Gálvez, who was shot in the left leg with a rifle. Such a wound often proved fatal at the time, but he survived, perhaps because of his unusually strong constitution. For his heroism in battle, he was promoted to lieutenant colonel.

The following year, after the death of Julián de Arriaga, Minister of the Indies, in January, 1776, Gálvez was appointed his successor. A few months later, on July 4, 1776, the Thirteen English Colonies on the east coast of North America declared their independence from Great Britain.

Now a colonel, Bernardo de Gálvez returned to America on January 1, 1777. He arrived in New Orleans as governor of Spanish Louisiana and head of the regiment garrisoned there. His predecessor, General Luis de Unzaga, a native of Málaga, had been extending aid to the North American Patriots for years, using the Mississippi as a conduit for supplies, mostly gunpowder and money.

That November, seemingly at the point of death, Bernardo married Felicité Saint-Maxent, with whom he would have three children: Matilde, Miguel, and Guadalupe. Shortly before the wedding, he had contracted an illness diagnosed by the medical experts as “intestinal amoebiasis”. It resulted in his having near-weekly health crises for the rest of his life, and Bernardo would succumb to the disease nine years later.

Gálvez remained actively involved in supplying all sorts of aid to the North American fighters, but he tried to do so in utmost secrecy, in order to avoid a premature conflict with the British. He also increased his network of spies, with the purpose of assessing the condition of the British installations along the left bank of the Mississippi and in the more formidable forts of Mobile and Pensacola, which held the key to West Florida. In these efforts, Gálvez would come to rely on the crucial collaboration of Oliver Pollock, a Patriot and the representative of Spanish Louisiana before the Continental Congress,.

Once Spain declared war on Great Britain, Gálvez, who now held the rank of brigadier, took the initiative, and in August, 1779, after overcoming the ravages of a hurricane in New Orleans, he advanced his troops toward the British forts on the left bank of the Mississippi. They were a motley army composed of 300 regimental soldiers, plus French, English, German, and Spanish colonists from nearby villages, as well as slaves, freedmen, mestizos, Indians, and North American Patriots, adding up to nearly 1,600 men. Under Gálvez’s command, they succeeded in occupying Manchac, Baton Rouge, and Natchez.

Nevertheless, two solid British redoubts remained: Mobile and Pensacola. This time, Gálvez and his troops would have to weather a massive storm that dispersed the naval convoy carrying the men before they succeeded in seizing Fort Charlotte in Mobile on March 14, 1780. Seven months later, an expedition left Havana to attempt a similar feat in Pensacola; however, another storm, a powerful hurricane, decimated the Spanish force. Gálvez would not be deterred. He persuaded the authorities in Havana to assemble another expedition, which managed to disembark on the island of Santa Rosa in March, 1781.

If he were to undertake the attack on the three redoubts defending the main British stronghold in West Florida, Gálvez needed naval support to shield his troops as they crossed from Santa Rosa to the mainland. But the mouth of the bay was being defended from Fort Barrancas Coloradas, where the British had mounted five 32-pound and six 8-pound guns. San Ramon, the lead ship of the support fleet, attempted to enter the bay but it grounded on a sand bar, and in what would be a tactical error, the fleet commander refused to send any more ships, fearful of a similar fate. Not even his lighter frigates would be allowed to attempt a crossing.

I offer you a 32-caliber bullet; it is one of the bullets being fired from the fort at the mouth of the bay. Let he who has honor and courage follow me. I will sail ahead on the Galveztown to dispel your fear.

Without further delay, Bernardo de Gálvez set sail on his brigantine, through the channel and into the bay. The British opened fire from the top of Barrancas, but not one of the 27 shots inflicted damage on the Galveztown. Gálvez was on the verge of accomplishing the heroic feat that would bring him lasting fame and glory.

During the siege, which lasted almost two months, Gálvez was wounded twice. Then, on May 8, an exploding Spanish mortar shell destroyed Fort Crescent, which towered over the other two forts, Sombrero and Fort George, and the British surrendered the next day. Over 1,100 men relinquished their arms, and some 150 cannons and a substantial amount of weaponry were now in the possession of the Spaniards. Gálvez was promoted to lieutenant general, and shortly thereafter, at the request of the inhabitants of Spanish Louisiana, King Carlos III granted him the title of Count of Gálvez. His coat of arms would bear the motto, “I alone” (Yo solo).

Bernardo de Gálvez’s victories occurred almost simultaneously with those of his father, Matías de Gálvez, who was active in another theater of operations, Guatemala, from where he expelled the British. King Carlos III also rewarded his valor, promoting him to lieutenant general and subsequently giving him the title of Viceroy of New Spain. He would be remembered there for his honesty and his protection of the Mexican people and their culture.

Yet Matías de Gálvez would not live long after his victory, and his son Bernardo was named his successor. In June, 1785, the Count of Gálvez arrived in Mexico to a clamorous welcome. Word of his heroic feats had preceded him, and his popularity only grew as the people became increasingly aware of his own kindheartedness and positive personal traits.

Gálvez’s tenure in New Spain would be brief, but he would be remembered, particularly for his leadership during a terrible famine, when a severe early freeze destroyed most of the crops in the area. To solve the crisis, he invested significant government funds, as well as his own resources, including the inheritance he had received from his father.

But Bernardo de Gálvez’s days were numbered the moment he contracted the disease mentioned earlier. He died in Tacubaya on November 30, 1786. He was laid to rest wearing the uniform of lieutenant general and shrouded with the cape of the Order of Carlos III. His viewing and funeral Mass were attended by large crowds who accompanied his body to the crypt at the main altar of the Cathedral of Mexico. Some months later, the body was transferred to its permanent resting place in the Franciscan Church of the Apostolic College of San Fernando in Mexico.

Bernardo de Gálvez was a great soldier and a great governor. In the 6th century, Sun Tzu had defined those virtues indispensable to a true leader: intelligence, honesty, humanity, courage, and discipline. Bernardo de Gálvez exemplified all of these. Today Spain, the United States, and Mexico can claim him as their hero.

In 1779, the great New Orleans poet, Julien Poydrás, who had witnessed many of Gálvez’s actions in Spanish Louisiana, wrote:

Privacy Preference Center
Design and development by Diego de Sousa
MAP
By clicking “Accept”, you agree to the storing of cookies on your device to enhance site navigation, analyze site usage, and assist in our marketing efforts. View our Cookies Policy for more information.
PreferencesDenyAccept