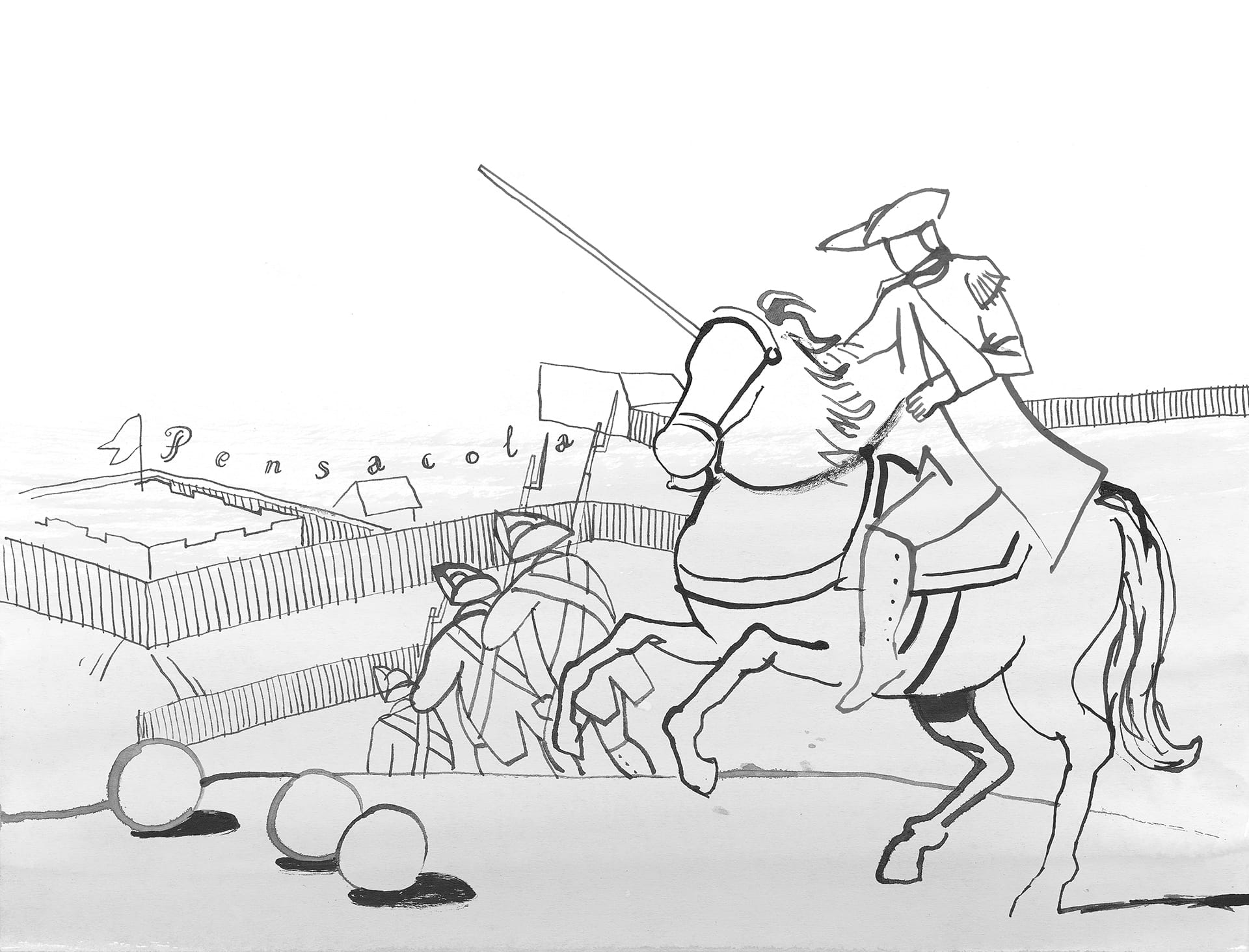 The Great Day of Pensacola

In 1775, Great Britain was forced to confront the rebellion of its North American colonies, which rapidly developed into an all-out war, and from there into international conflict. France became involved in 1778, and in June, 1779, Carlos III, King of Spain, declared war on England. One concern of the Spanish Crown was the threat posed by the British presence in the Gulf of Mexico and in Florida to New Spain and other possessions in the Caribbean.

The sector most at risk was the Bay of Panzacola (Pensacola Bay), where British ships could anchor and from there launch attacks on Spanish Louisiana. The British commander in chief, General John Campbell, had ordered the construction of three fortifications to protect the city and its environs.

Bernardo de Gálvez, then governor of New Orleans, was an energetic 34-year-old field marshal determined to do battle for the king of Spain. In September, 1779, he took control of all the British posts along the Mississippi. He also arranged for the delivery of arms and provisions to the North American rebels. In March, 1780, with reinforcements arriving from Havana, he took control of Mobile, the other significant British stronghold in British West Florida and a gateway to Pensacola. In February, 1781, after a frustrated attempt the year before, when a hurricane decimated his fleet, Gálvez set sail once more from Havana, in command of 32 war vessels and over 3,000 men, en route to Pensacola.

Gálvez had had to overcome the misgivings of the authorities in Havana concerned over the defense of the island. Fortunately, he still had some of the 11,000 soldiers belonging to the huge military expedition sent from Cádiz the year before. But many of the men had succumbed to illness during the voyage, and others would become victims of tropical diseases after their arrival. This meant that the troops had to be replenished with forces from Cuba, Spanish Louisiana, and Mexico.

On March 10, after first disembarking on the island of Santa Rosa, across from Pensacola in the mouth of the bay, Gálvez set his military campaign in motion. On March 18, the fleet entered the bay under heavy enemy fire, with Gálvez at the lead aboard his brigantine, Galveztown. On the 23rd, he received reinforcements from Mobile and New Orleans. They were his best officers and veteran soldiers, among them Colonel José de Ezpeleta, the España Infantry Regiment, the Fijo de La Luisiana Regiment, and his militiamen from New Orleans.

At the end of March, the Ejército Expedicionario began its march from its second landing at the mouth of Sutton Creek, west of the city, toward the enemy forts. The soldiers plodded through swamps and dense pine forests, under constant attack by Creek Indians allied with the British, who would continue to beleaguer the troops throughout the campaign. At last, Gálvez’s men reached the wooded area closest to their target.

The Spanish troops and artillery set up positions for a siege of the fort. They dug rows of trenches that would allow them to respond to fierce enemy fire, while they tightened their noose around the fort. Weeks of trench warfare would follow, characterized by attacks and counterattacks, smaller skirmishes in between, and the constant roar of cannons exchanging fire in the background. Digging in sandy soil was relatively easy, yet the number of losses from desertion and illness kept rising, at the same rate as the depletion of their ammunitions. On April 21, important reinforcements arrived: a squadron from Havana under the command of Admiral José Solano, which included a Spanish Naval Infantry unit and French troops under Chevalier de Montiel. Gálvez’s troops now numbered 7,000 men.

Despite mild temperatures, the area was plagued by frequent storms and heavy rains. In April, a tempest destroyed tents and parapets, soaking the combatants. On May 5 and 6, a powerful hurricane forced the Spanish squadron to set sail for open sea, cutting itself off from the fighters. Almost immediately, the British initiated a fierce counterattack against the Spanish trenches, killing some 50 men.

Conditions deteriorated rapidly as the number of dead and disabled continued to grow, some as casualties in battle, others from illness and food shortage. The troops faced a lack of munitions and were beset by doubts over the fate of the Spanish fleet at sea. Gálvez realized he needed to make a final push or give up the assault. On May 7, he positioned his artillery where it could inflict the most damage and prepared his first nighttime raid. However, the darkness slowed the pace of his men, and Gálvez suspended the assault, though the cannons kept up their intense volley on the enemy.

On May 8, at 6 a.m., the three enemy forts, Crescent, George, and Prince of Wales, raised their flags and began their usual cannon barrage on the Spanish forces. But this time, the 24-pound cannons and high-caliber guns, which the Spanish and French artillery had just finished positioning at closer range, returned fire. One of the projectiles hit the powder kegs inside the Crescent, blowing it to pieces and killing over a hundred men. At once, Gálvez ordered 1,700 men to attack the redoubt in two columns led by Colonels Ezpeleta and Girón. After fierce fighting, the troops occupied the heavily damaged redoubt and positioned several artillery pieces to counter the British volley from the other two forts. It would take another three hours of musket and cannon fire for the enemy to end their resistance and raise a flag of truce. The next day, faced with no other alternative, General Campbell signed his surrender. Bernardo de Gálvez marched at the head of two grenadier units and occupied the city.

On May 9, as stipulated by the articles of capitulation, all the British forces surrendered in a formal ceremony. To the beat of drums, with flags unfurled, shouldering their arms, the entire garrison of over 900 men marched out of Fort George behind General Campbell and the governor of West Florida, Peter Chester, to be greeted with a six-gun salute, after which they laid down their arms and their flags. The victors took possession of 1,250 prisoners and about 150 artillery pieces. The British forces had lost 219 men; the Spaniards, 300. Today, 91 military officers and soldiers rest somewhere under the sands of current Pensacola. Thanks to their sacrifice, West Florida had been restored to the Spanish Crown.

In order to effect a swift surrender, and given the shortages and illnesses afflicting his own troops, Bernardo de Gálvez felt compelled to agree to Campbell’s request that the British garrison be allowed to travel to New York via Havana, on the condition—the English general’s word of honor—that they would “not take up arms against any of our allies.” The news alarmed George Washington, who was preparing a summer offensive on New York. However, after the defeat of the British fleet in the Chesapeake, Washington modified his strategy, moving his troops further south to attack the British forces clustered in Yorktown. The situation of the British army, in the fifth year of the war, made it unlikely that the prisoners from the battle in Pensacola would take part in any future major operation. For the Spaniards, however, the victory in Spanish Florida would be complete with the expulsion of the English from Honduras, Guatemala, and the Bahamas.

In October, 1781, Gálvez wrote Francisco Rendón, the Spanish envoy to George Washington, to propose a major military campaign using Spanish and North American forces against the southern states still under British control. By then, Washington was fully engaged in the siege of Yorktown and could not consider any other kind of joint military maneuver. The crushing British defeat in the Battle of Yorktown would render further military cooperation between the two generals unnecessary.